Past Events at Hotel Gracanica

On 30 April 2022, Ebru Jılta held a concert at the hotel for a group of Swiss visitors and other guests. Check her songs on Youtube, e.g. https://www.youtube.com/watch?v=BIj-x-4eGxw

The Jimmy Mustafa Band that regularly plays at our Sunday brunch has recorded their second album, "Romane Bajrakja", in June (album cover painting: Bajram Mehmeti) and immediately went on tour in Germany. In October, 2019 they will go on their second tour in Switzerland, with these concerts:

For a feature of the German public radio about the band s. Das Ende vom „Zigeunerlager Auschwitz“. Massenmord im August 1944

Not at the hotel - as usually every Sunday -, but on tour in Germany: The Jimmy Mustafa Band will have concerts in German from June 7th to 23rd 2019. For details s. https://jimmymustafabandontour.wordpress.com/

„Prishtina you beauty, you beast, you desert and garden of flowers, you reality and appearance, you chameleon against stagnation, you end of history and then again somehow clash of civilizations. You home of mine, you stranger to me.“ AH.

You are cordially invited to the exhibition opening of SecondSight - a photo exhibition and a documentary-literary declaration of love on second sight for Prishtina by Aleksandra Hiltmann.

Kosovë/o is everywhere is a project of Bern ist überall (Berne is everywhere), a group of Swiss writers and musicians, together with Qendra Multimedia. Authors from Kosova and Switzerland are on stage together and present literature in different languages as a sort of performance. The tour starts at the Qendra Multimedia in Prishtina, and then takes the group to Gračanica, Ferizaj, Prizren, Gjakova, Peja and back to Prishtina.

Ariane von Graffenried: Born 1978, she lives and works as an author in Berne. Ph.D. in theatrical sciences, she writes for stage and the medias. With the musician Robert Aeberhard she created the duo Fitzgerald&Rimini. Her book « Fleur de Bern » [Flower of Berne} was published in 2010 (knapp Verlag), her CD « Aristokratie und Wahnsinn » in 2011 and in 2015 her second CD « Grand Tour » (Verlag der gesunde Menschenversand). www.fitzgeraldrimini.ch

Shpëtim Selmani, a 28-year-old, a poet and an actor from Kosovo, is a guest in Belgrade. He is part of a residential program organized by the same people who organize the regional festival of literature KROKODIL. Selmani studies sociology at the University of Prishtina and has completed his master degree in acting at the Academy of Arts in Prishtina. He has published two poetry collections: Inside the Shell/Brenda Guacës (2006) and Poetry/Poezija (2011). Some of his poetry has been translated into Serbian for an anthology “From Prishtina with love”, through which the readers from Serbia got introduced to contemporary Kosovar literature.

Maru Rieben: Born in Berne, 1963. She is formed as jazz percussionist and media artist. She collaborates with artists from a modern dance background, from the performance, theater, literature (spoken words) and video. She performed in Europe and in Japan,  recorded several CD. In parallel to this, she teaches at a music school. www.marurieben.com

Art Lokaj, born in Prishtina, 25 years old. He has a BA in Albanian Literature in University of Prishtina “HasanPrishtina”, Prishtina (Kosovo). Performing guitar and keyboards in different genres such as blues, funk, pop, rock and modern/alternative music. Working with different kinds of sound equipment to build sounds that fit the genre/song. Finding the songs that fit the idea of the producer/writer or writing/recording an original song/idea for the project. The ability to improvise and play along with other musicians. Highly passionate about working with garage bands, theater groups, small venues, production companies, etc. As a guitarist, he performed and recorded with a lot of artists such as EnedaTarifa, EdonaReshitaj, RinaBilurdagu, Nita Latifi, ElhaidaDani, Redon Makashi, AleksanderGjoka, Elton Deda, Xuxi – NaimBunjaku, Mentor Haziri, Alban Skenderaj, etc.

Concert of Proximity Mine

Catch up with this phantastic band just preparing their first album and on their way to a concert in Vienna! Proximity Minie is one of the seven multiethnic bands of the Mitrovica Rock School.

Click on the links for more information about the band and their concert in Vienna and a sound sample! It is the second concert of the band at the hotel (scroll down).

Saturday, January 21st, at 4pm, students of the tailor and hairdresser courses of the Diakonie Training Center Mitrovica will hold a fashion and hair show at the hotel. You are cordially invited! The fashion and hair show will be accompanied by performances of the Urban Dance Crew Mitrovica.  The Urban Dance Crew Mitrovica has already had a fascinating performance at the hotel on 29 July 2014 (s.https://www.hotelgracanica.com/news/) and a successful tour through Germany in 2016. As the space in the hotel is limited, we cannot promise you scenes like the one on the photo, but you'll certainly be impressed! Links:  - https://www.facebook.com/Diakonie-Training-Center-717532191610209/?fref=ts - https://www.facebook.com/udc.mitrovica/?fref=ts

Cinema by the Pool: "Welcome to Plemetina" and "Pretty Dyana"

Come and watch two of our favorite documentaries about Roma: "Welcome to Plemetina", a touching film made in 2003 by Roma youth (credit: Balkan Sunflowers), showing the life in their community and the dreams of the children there. And "Pretty Dyana": "Romani immigrants struggle to survive in the outskirts of Belgrade using only Citroën's Dyane as a truck, transportation device and power supply - as a life support system."

Do you have a proposal for a film that we should show? Contact us!

After the wonderful concert of Sublime 6 and Akasha on October 2nd, now two other bands of the Mitrovica Rock School will perform at the hotel, Proximity Mine and High Frequency. Samples of their music: Proximity Mine: Video: https://youtu.be/Qp1DJiniRIY Audio: https://soundcloud.com/mitrovica-rock-school/proximity-mine-mwah High Frequency: Video: https://youtu.be/MueKd7AdR0c Audio: https://soundcloud.com/mitrovica-rock-school/high-freqfency-no-way-out

Photos from the concert (below): Kiklop 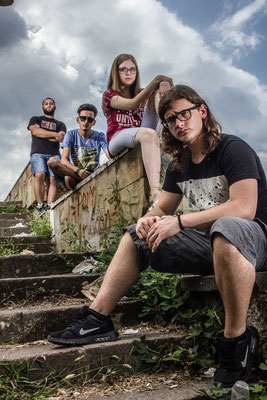 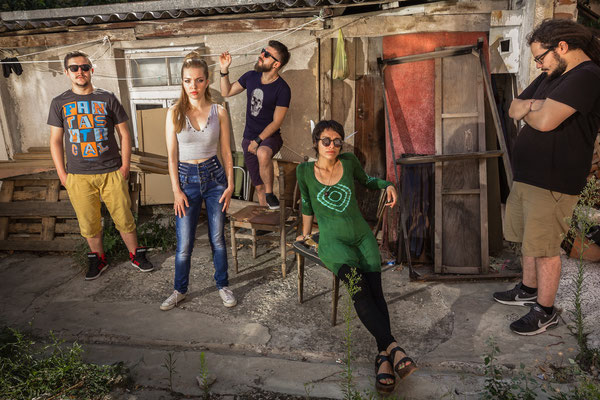 Photos of the opening by Layla Baraké

Article in "Prishtina Insight" about the exhibition: http://prishtinainsight.com/portraits-parallel-world-mag/:

Reading by Elizabeth Gowing from her new book "The Rubbish-Picker's Wife. An Unlikely Friendship in Kosovo"

From 14 to 22 and on 30 September, you again have the opportunity to watch our cooks and their helpers prepare ajvar the traditional way, learn how to do it yourself and/or buy a jar (7 €). The word "ajvar" is related to "caviar" - and it indeed is just as delicious! s. http://en.wikipedia.org/wiki/Ajvar

Photo studio every Sunday from 11am to 3pm

A great opportunity to have your portrait taken - or a portrait of your spouse, kids or your team!

Portraits taken at the documentary and short film festival Dokufest in Prizren this summer (s. http://dokufest.com/2014/500-faces-that-dont-hide/). 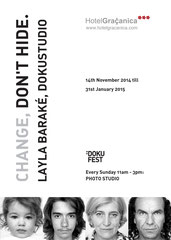 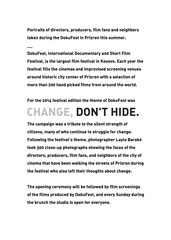 Photos of the opening by Jetmir Idrizi

Report on KTV Express about the Exhibition:

The video "Once Upon a Time" is the result of a German-Israeli artists' exchange in 2011 under the title "Heimat - Homeland". It reflects experiences of the artist of her early life in the German Democratic Republic where she participated in the Monday demonstrations that led to the fall of the Wall.

At Hotel Gracanica, it will be shown behind the grilled windows of a kiosk that, until the Nineties, used to stand in front of the headquarters of the security forces in Pristina. In the video, the artists cuts, one by one, the barbed wire around her. An allegory for individual and collective prisons and the liberation from them. Kosovo counted and counts many of them.

Gollub's other works shown at Hotel Gracanica take up the thread of the video in prints - that show woolen threads that look like barbed wire - and light objects.

At the opening, you will also have the chance to see performances of the multiethnic Urban Dance Group of the Diakonie Youth Center in Mitrovica.

More about the artist: ankegollub.wordpress.com

Photos of the Opening (Layla Baraké):

Article in the Münstersche Zeitung about the exhibition

Article in the "Westfälische Nachrichten" about the exhibition:

Photos from the opening of the exhibition by Layla Baraké

Virtual Tour of the Exhibition

Click on the photo to start the tour. Click further to switch to other parts of the exhibition or to take a closer look at the art works

Hosting the President's lunch for the Diplomatic Corps

As we move into 2014, give yourself a moment to pause, refocus, nourish & renew at the blissfully luxurious Hotel Gracanica. A mix of hatha and meditation practices to release the winter blues, contemplate positive intentions for 2014 and, most of all, to enjoy the present. Time to explore a new side of Gracanica, enjoy the glow of the fireside, views of the countryside and replenish yourself with delicious food. We (Narayani & Laura) are excited to share this special weekend with you - let us know if you'd like a personalised yoga therapy or health coaching consultation - it's in the price too :) Looking forward to hear from you :) Yoga Narayani - Yoga & Yoga Therapy Yoga and Wellness Coaching with Laura

More articles about the book and the presentation:

Photos of the opening event on 1 November 2013: Layla Baraké